1.) To decrease the risk of cervical cancer, teenage girls should be required to get the HPV Vaccine.


Every girls and womens bodys are different and therefore should not be treated the same.and yes cervical cancer is one cancer with one treatment but not everygirl has the same reaction to the vacine. while to some girls the vacine has no negative side-effects, to other girls the vacine seems to hurt them in some way. girls get cervical cancer when they are sexualy active, if they were born in the 60s or if their mothers took drugs during their pregnacy. if a girl does not fall under any of these they should not be required to get the vaccine, it should be their choice to get it or not becouse it is their body. if the vaccine happens to have a negative effect on someone the hosppital will most likly not take any responsibility for it, but if a girl choses to get it and it has a negative effect then it falls under her actions. consequences shold not be forced upon anybody who does not agree to them. i understand the importance to stay protected and this is why i belive that doctors should continue doind as they are right now and imform their pationts about this vacine, but it should be up to the girl wether to get it or not.
Posted by nawal el-saadawi at 6:43 PM No comments:

the article suggests that obama is doing the right thing by eforcing the border through the method of sending more immigration agents to enforce the border from illigal traffiking of both humans and drugs. enforcing the border is whats righ, they should stop people from comming and leave the people that have been here for years alone. this might seen hipocritical becouse the people that cross illigaly today come here with the same purpose as the people that crossed years ago. the thing is that we live in a time were the new illigal alliens are treated as slaves just like the africcans in the 1700s. the people that come here dont come with the purpose of bringing down the country down, they come with the hopes of fullfilling a dream known as the "American Dream". unfortunatly they dont know that this dream is immposible to fullfill today, if i could i would tell them all that there probobly better of making a life were they are, insted of always tring to be a ghost so that they are not targeted, i would tell them about how this country seems to have gone hundreds of years back, and how the laws in certain states are constitutional becouse of the racial profiling. obamas enforcement of the border will help some people from living an unjust life. the article also makes it seem as though they are not doing this so much as to stop illigal immigration but to stop the illigal trafficing of drugs. the article also suggests that yit is the same illigal immigrants that try to cross over that also cross over these drugs. this is not true becouse when they have cought people crossing these drugs over, for the most part is it done by people that are alowed in and out of the country.
Posted by nawal el-saadawi at 6:17 PM No comments: 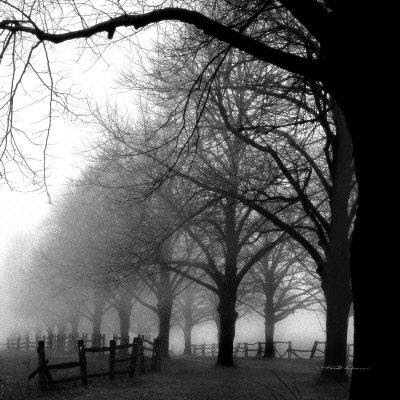 Similarities:
both black and white
both deal with trees
background of sky

why:
if i were two write about these two pictures i would write it subject by subject. Even though there are not that manny things to compare it by, it would be easier to explain everything in one picture and then compare it to the other. Subject by subject would also alow the reader to look at one picture and then the other without looking back and forward.
Posted by nawal el-saadawi at 5:55 PM No comments:

i often have to be carefull about where or when i bring my little cusin around with me becouse often times, once i bring him along it becomes verry hard to get rid of him becouse hell always want to be with me. my little cusin has become a piece of chewed gum. its ok to have it for a while but then if your not carefull on how you get ride of it, it might get stuck to you and then it becomes very difficult to get it off. no matter how much you try to remove it completly thers always somthing left behinde such as a smart remark, or the simple unforgetable behavior. the thing about having a chewed piece of gum is that its not always an unplesent experience somtimes you even feel that the gum can distract you or even help you relax. infact its all in how you handle the gum.
Posted by nawal el-saadawi at 3:34 PM No comments:

As the sun began to set, thoughts of doubt crouded her brain. she looked to her sides and saw the face of her children, all three of them unsatisfied from their bellies, and so tiered it was hard to sleep. looking back to the that day she knew that if she would have met these three faces back then she would not be sitting in the place where she is now.
Like manny single mothers with bastared children Maria decided that imigrating to the us might be the best desition to make. Besides, she had herd manny rummered stories about what life was like in the land of opportunities. Unfortunatly like in most situatiuons, reality is often harsh and not like the rummored stories. Maria still looked younge and full of life when she first arived, but now with everithing she went through, she had aged.
When she had made this desition she had done it so that her kids might have a better life than she did, a good education, a good job, and some day maybe even a good family. Now she doubted her dreams, it seemed that with every day that when by it became harder for these dreams to ever even someday seem real. Unfortunatly there was nothing for her to look back at either. She had left no known family behinde, and everithing she had ever owned, she had sold, and the monny she got from it wasnt enough for anything.
Maria just sat, emty, no longer full of dreams and life. especialy not life, life had become the enemy, it was becouse of the way life treated her that she was were she was. Yet she secretly hoped that life might still be there the next day. that maybe life might become a friend.
Posted by nawal el-saadawi at 10:03 PM 1 comment:

http://www.passiveaggressivenotes.com/
It took me a wile to find one blog that I realy liked and I settled down with this one becouse it's defenetly not dull. Thought it is not all that interesting in the sence that its purpose wouldn't be considered to educate, it is interesting in the sence that it's extreamly random so you finde yourself to be very entertained by it. Although there is no picture, or stated name of the speaker, I infered that it is a younge girl. I came to this conclution after reading only the first two becouse of the sarcastic diction used through out the rest of the postings as well. Becouse there are pictures of the notes posted right on thew blog, the speaker automaticly creats belivable ethos. I realy liked that this blog is not directed to only one kind of audience, but is written so simple and strait forward that anyone can enjoy it. From this blog I have learned that it is a lot better if you provide visual evidence to supprt what it is your addresing.
Posted by nawal el-saadawi at 11:11 PM No comments:

angary, you would think it was related to being angry but no, it actually means seizure rights.
sarsen, means block of stone.
cassia is am aromatic bark (usually smelly like cinnamon)
Posted by nawal el-saadawi at 11:09 PM No comments: